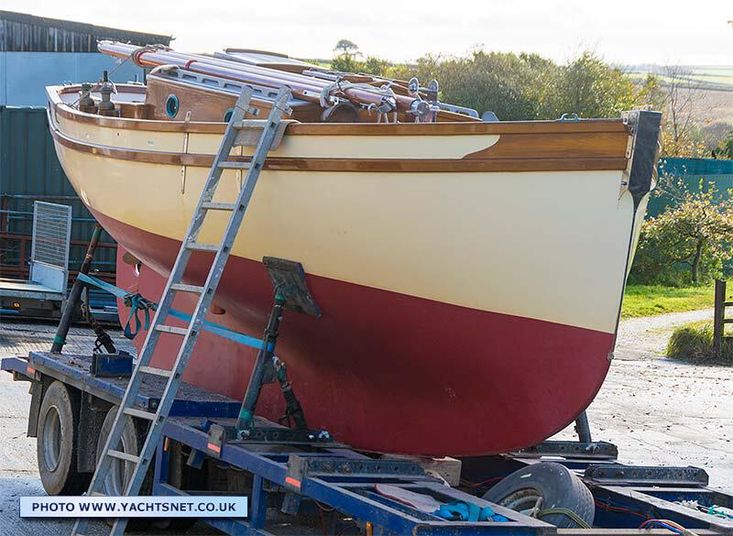 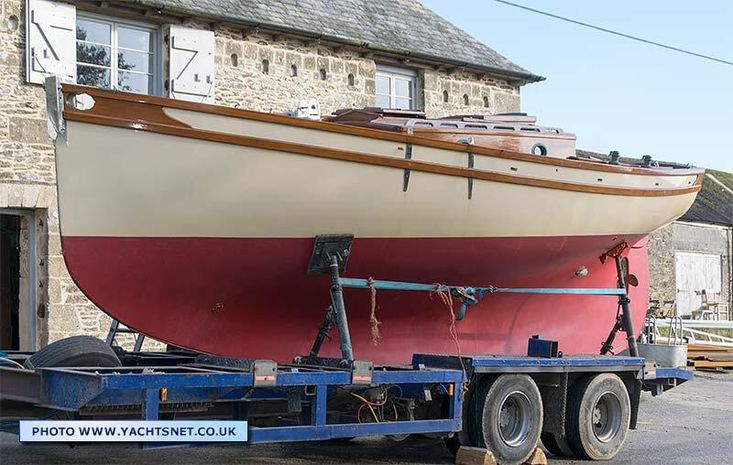 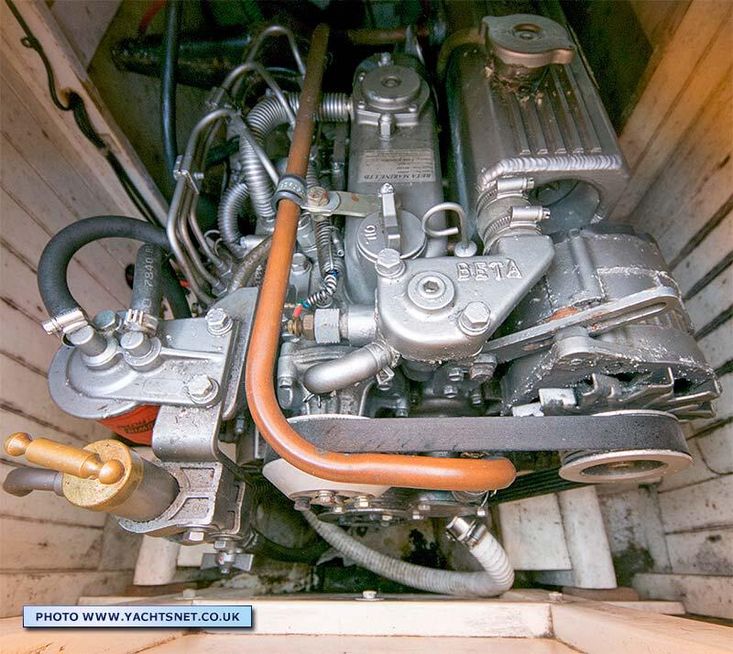 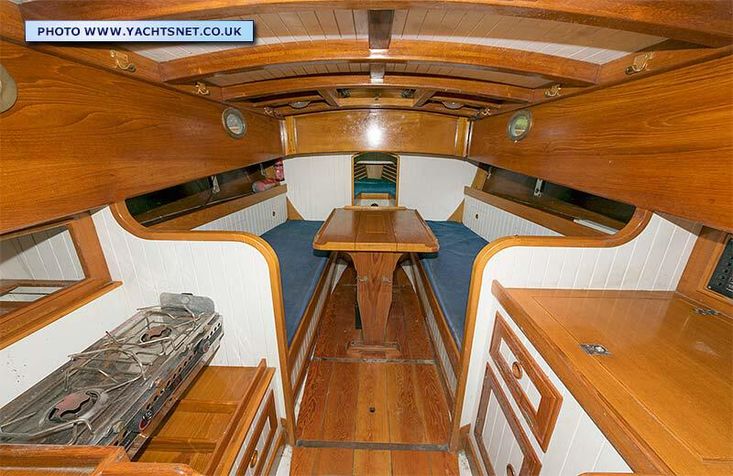 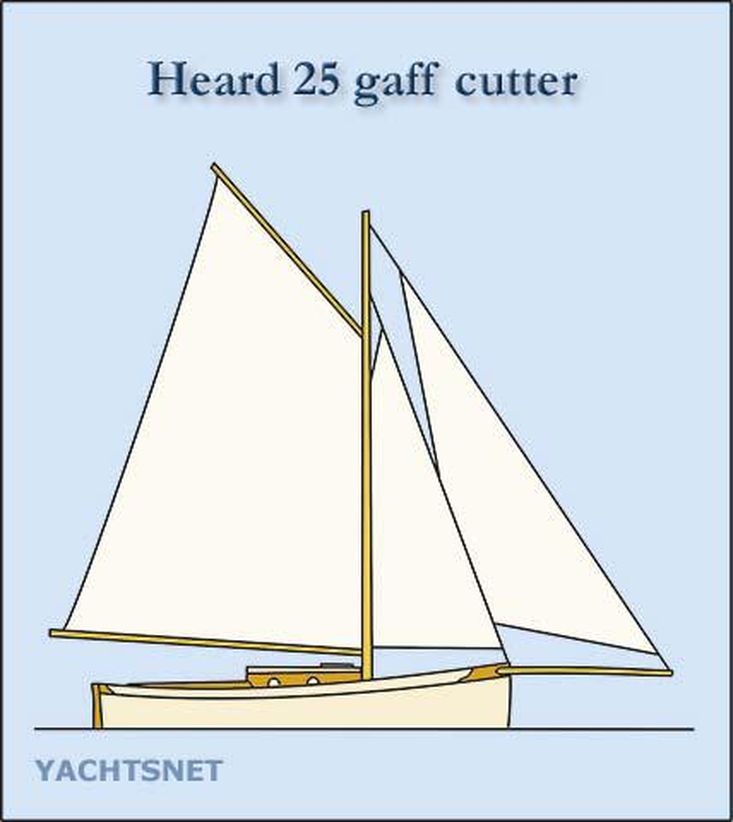 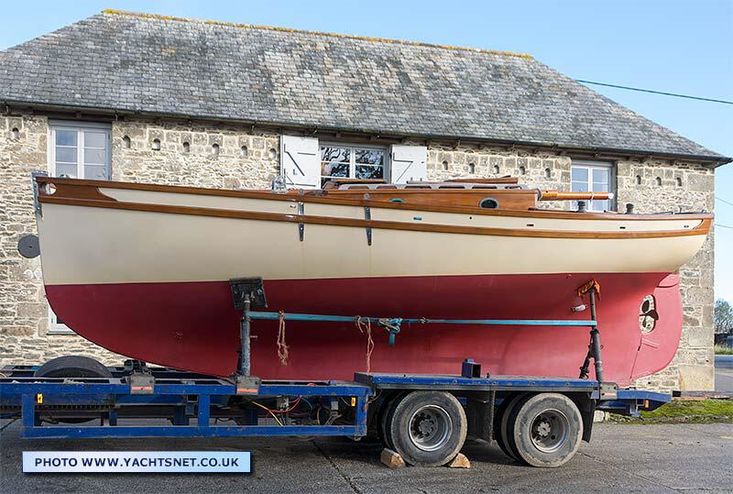 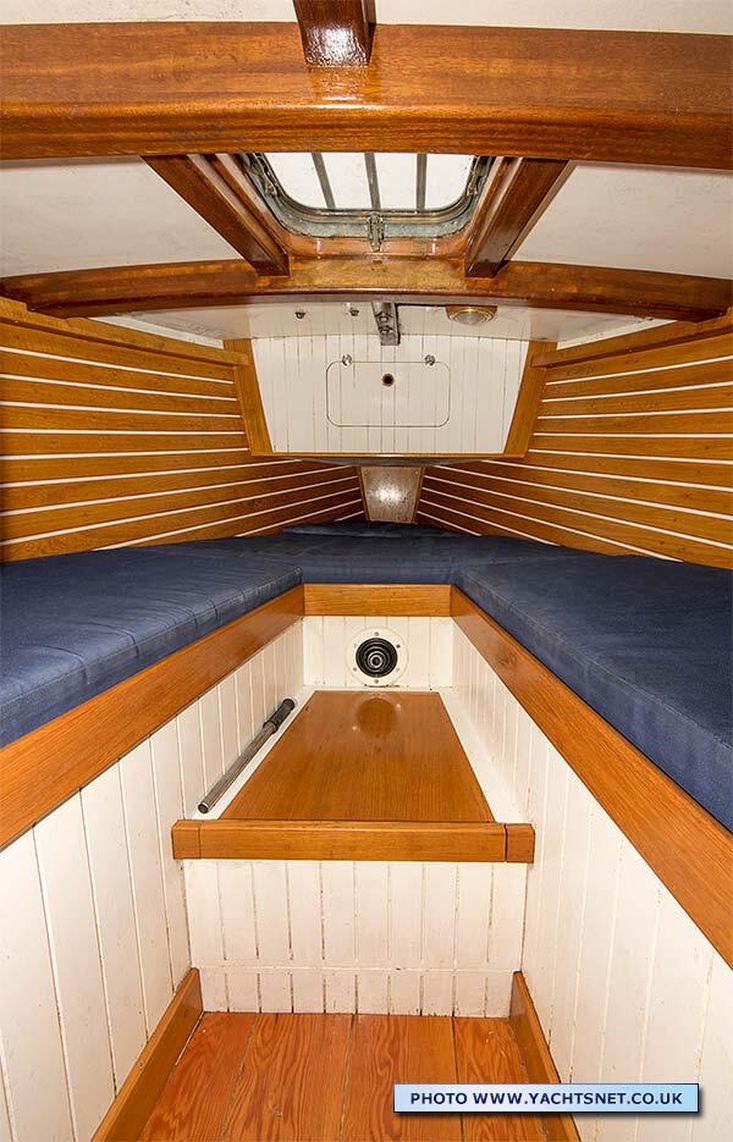 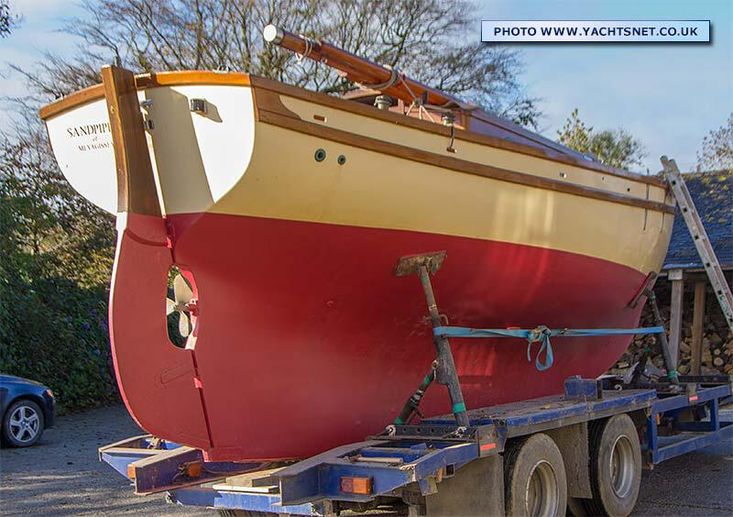 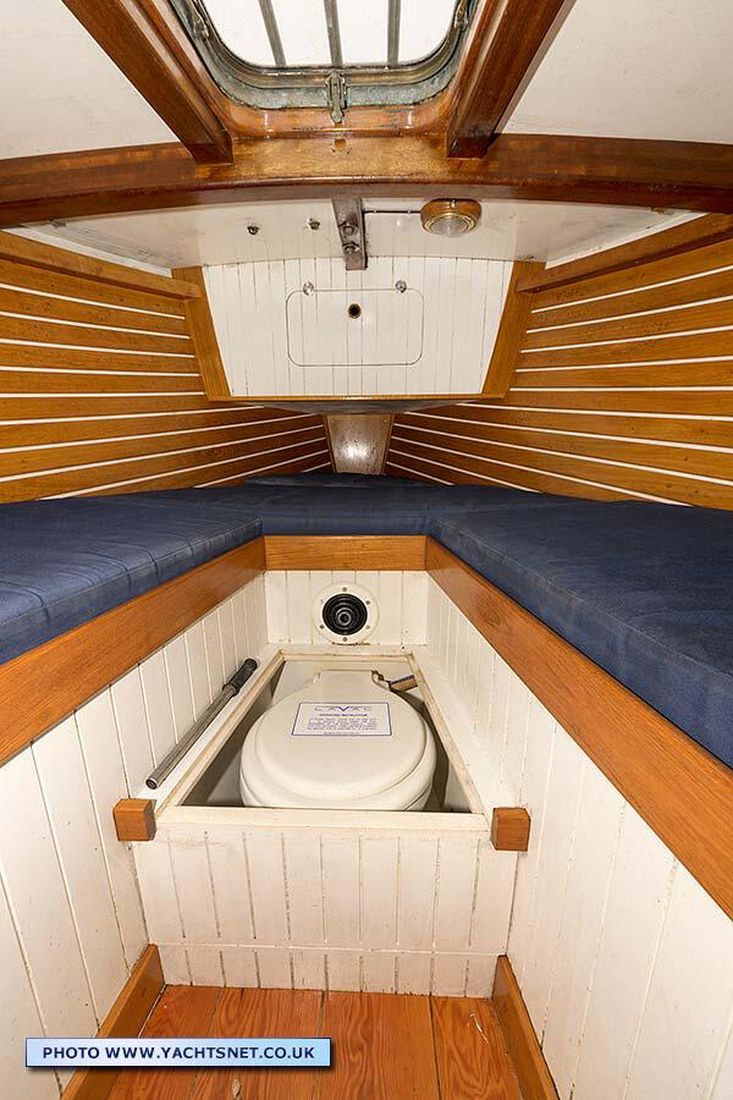 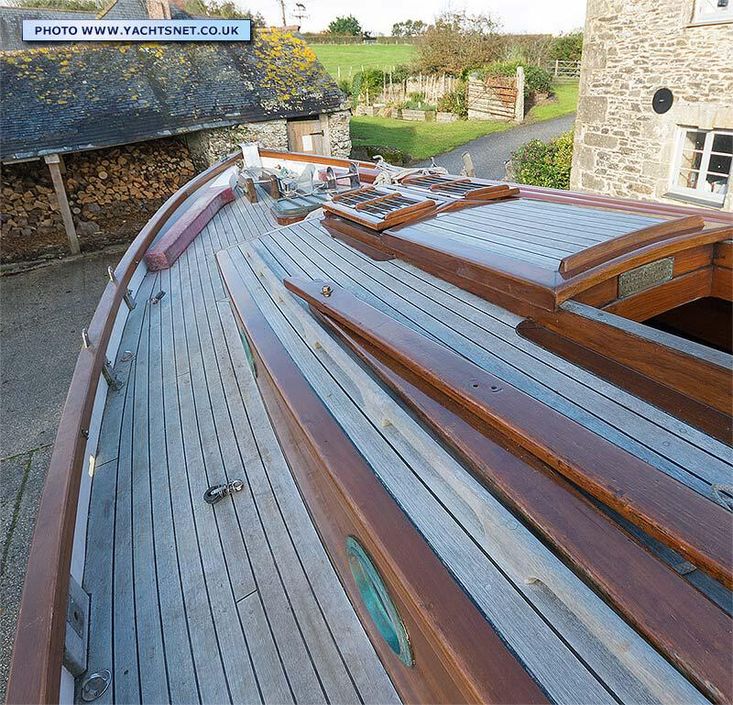 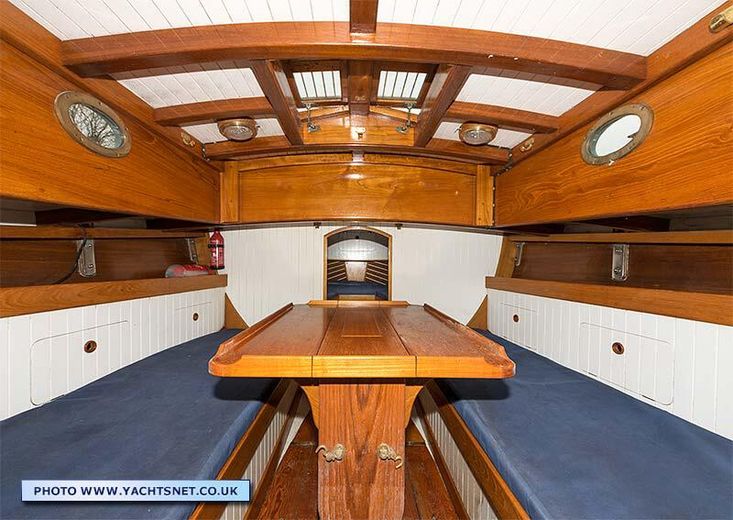 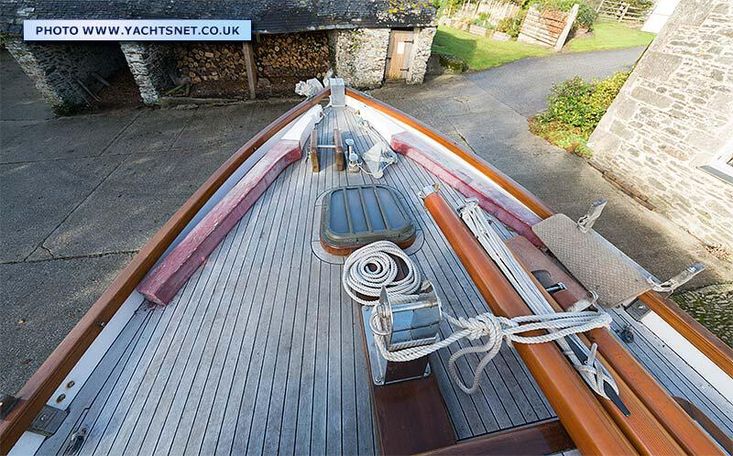 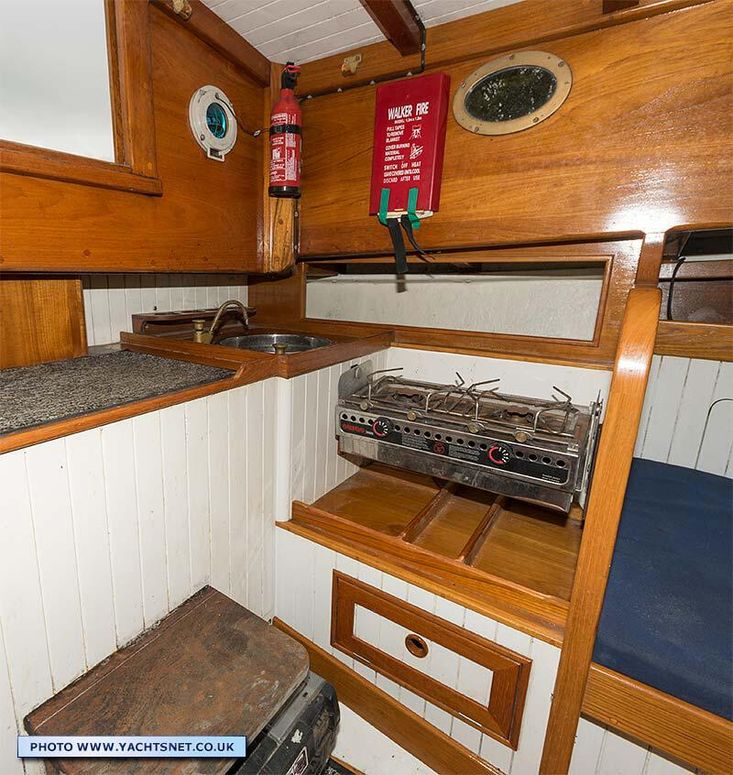 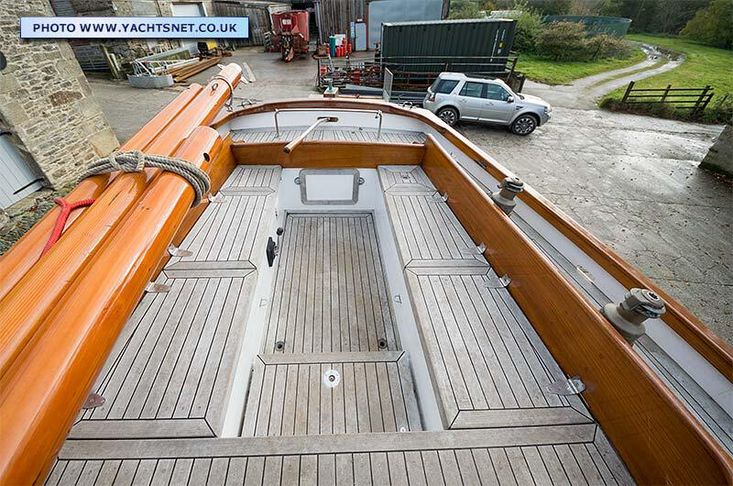 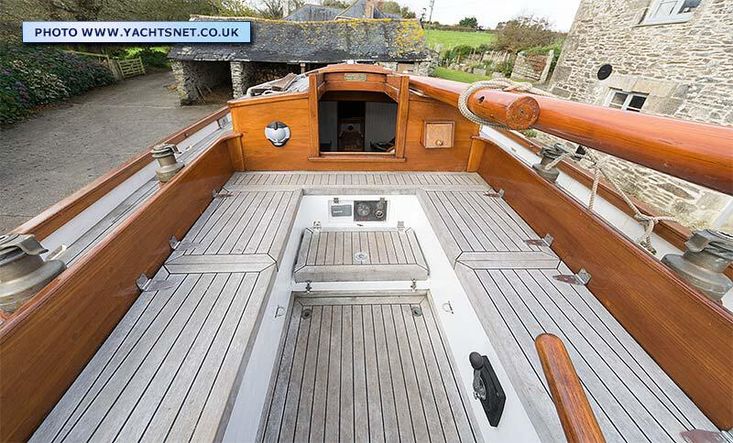 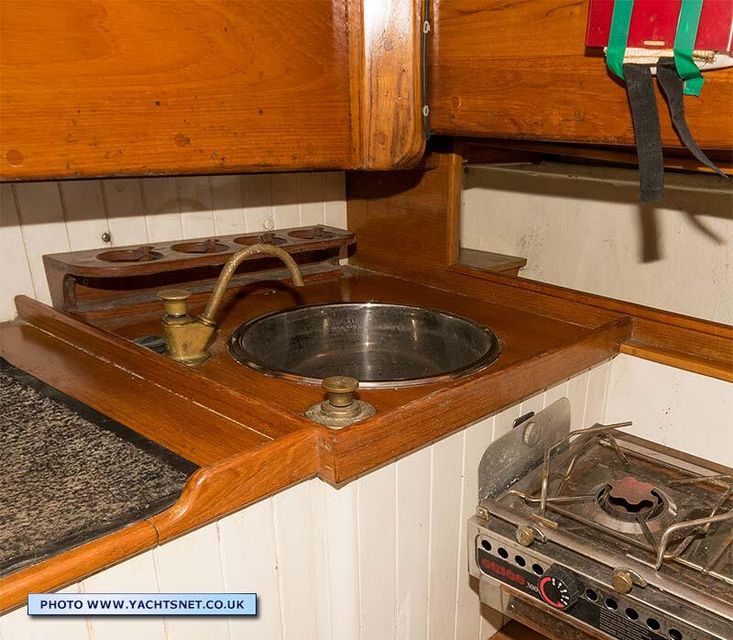 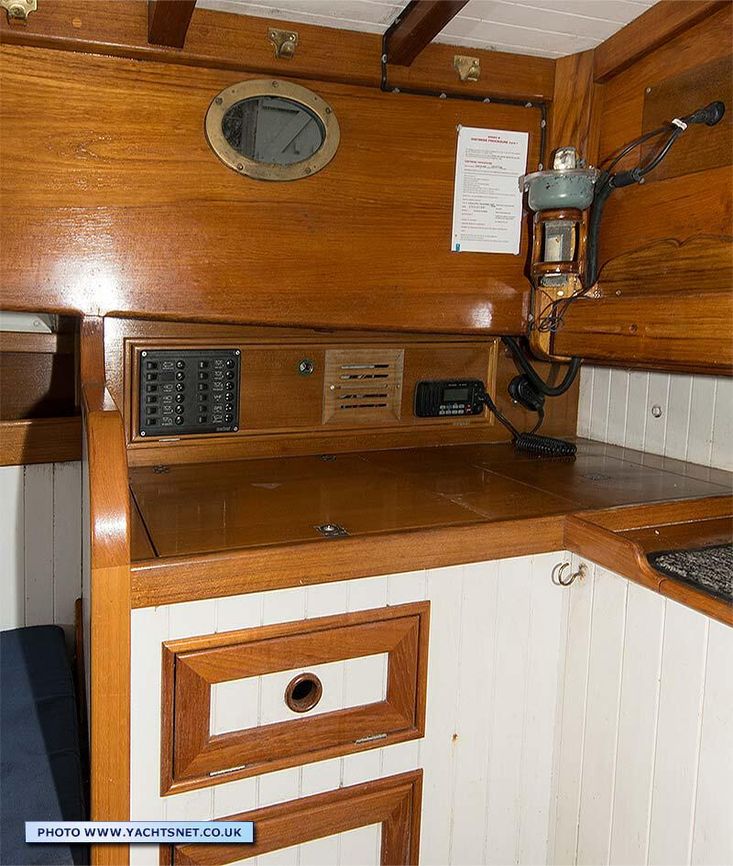 This is one of the rarer Heard Falmouth Working Boat types, the Heard 25. Designed by Percy Dalton, she is simply but very nicely fitted out in teak, with laid teak decks. She is in her original ownership, and since launch has only been sailed for 4-5 months each year, the remainder of the time being stored ashore under cover inside the owner's barn.

This 25-footer is a beautifully built and fitted out example of the type, and is set up for daysailing, classic racing and cruising for a crew of two. Although there are four berths and the cockpit can seat six, she would be very cramped if four were to sleep on board. She is for sale now, somewhat reluctantly, as the owner feels age is creeping up on him.

To see larger photos and a detailed inventory on our own Yachtsnet website click on the "Open website in new window" link here in Apollo Duck. This is just above the red "CALL NOW" button.

Saloon headroom is just under 5 ft below the deck beams. The saloon berths are 6' 2" long and the vee-berths in the forecabin are 7' 0" long on the vee. A Lavac heads is under a small lid between the foredeck vee-berths.
Forecabin

In 1965 Terry Heard founded Gaffers and Luggers on Mylor Creek near Falmouth. Since then Terry and his son Martin have built hundreds of traditional GRP hulled sailing boats, mostly of the well-known Falmouth Working Boat type. When Martin Heard died in 2009 his son Sam Heard has continued the business on a smaller scale and continued the family tradition, building new boats and running the boatyard for lay-ups and refits.

Whilst the more common Heard 28 Working Boat was built on moulds taken from an old wooden original, the 25 was designed as a yacht on Working Boat lines by Percy Dalton (1906–1982), who was a noted artist and yacht designer who spent most of his working life in Falmouth. Like all the Heard Working Boat types, she has a heavily laid up solid GRP hull, with encapsulated internal ballast, and deck and superstructure in timber. All these Heards are fairly heavy displacement, with a substantial rig, in this case with hollow spruce spars by Noble Masts of Bristol.

There is no "standard" specification for most of the Heard boats, as each is built for the specific request of the buyer, with slight variations in fit out and layout. According to Sam Heard, this Heard 25 will probably displace about 5 tons.

The particulars detailed herein are intended to give a fair description of the vessel but their accuracy cannot be guaranteed. These particulars are not a part of any contract or offer, and are supplied on the understanding that all negotiations shall be conducted via Yachtsnet Ltd., who are acting as brokers for the vendor. The vendor is not selling in the course of business unless otherwise stated. The prospective purchaser is strongly recommended to check the particulars, and where appropriate, at his own expense, to employ qualified agents to carry out surveys, structural and/or mechanical & electrical checks or tests.