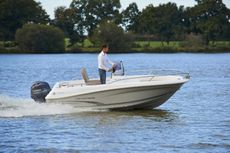 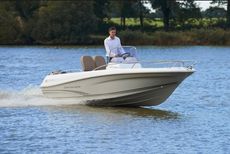 Jeanneau Cap Camarat 4.7 CC
Whatever your intended uses, the Cap Camarat 4.7 CC can do it all: sporty outings for two, fishing and family cruising. With a 40 or 50 HP engine, she is both fast and fuel efficient, as well as fun to drive.

Her stability at a stop and spacious aft cockpit will appeal to fishermen. The generously sized forward cockpit can comfortably accommodate your guests around the table for moments of fun and relaxation on board.
The entire cockpit can be transformed into a large sundeck for maximum enjoyment on sunny days. Transport her easily to your home or to discover a new destination by trailer.

In the late 1960’s, pleasure cruising sailboats became mainstream, and shipyards like Jeanneau would produce their first sailboats to benefit from this new enthusiasm for sailing. Technological innovations lowered production and purchasing costs, and pleasure cruising became accessible to the masses. The celebrated Glénans sailing school found its stride in this same period. It was the end of the age of the aristocratic sailor, and sailboat production exploded with the fabulous Sangria, a model launched by Jeanneau in 1970 that sold over 2,700 boats. This formidable success cemented Jeanneau’s place at the forefront of the marine industry in the design and construction of cruising sailboats.
ID: 17759