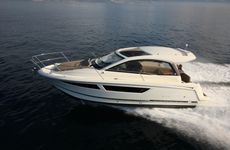 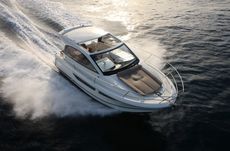 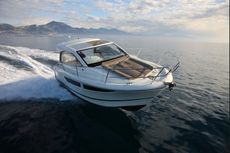 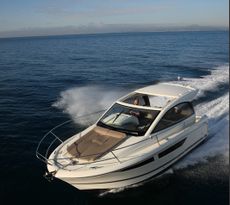 Leader 9 is perfectly aligned with the philosophy of the new line of Leaders: contemporary and innovative design, excellent performance, bright living spaces and comfort onboard. She features the choice of a sport top in two configurations, with a hard or soft top. Priority is given to comfort, with a layout featuring two generously sized living spaces. Without a doubt, you will not want to leave your Leader 9 at port.

In the late 1960’s, pleasure cruising sailboats became mainstream, and shipyards like Jeanneau would produce their first sailboats to benefit from this new enthusiasm for sailing. Technological innovations lowered production and purchasing costs, and pleasure cruising became accessible to the masses. The celebrated Glénans sailing school found its stride in this same period. It was the end of the age of the aristocratic sailor, and sailboat production exploded with the fabulous Sangria, a model launched by Jeanneau in 1970 that sold over 2,700 boats. This formidable success cemented Jeanneau’s place at the forefront of the marine industry in the design and construction of cruising sailboats.
ID: 18281


Boats for sale
by continent